Where to Find the Best Views of Dartmouth

With its sun-soaked harbour, period buildings and lush green trees, Dartmouth is truly a jewel in the South West’s crown. Whether you’re a professional photographer from a travel magazine or a tourist keen to try out your new smartphone camera, the town provides plenty of stunning photo opportunities, as highlighted by our Dartmouth photo gallery. 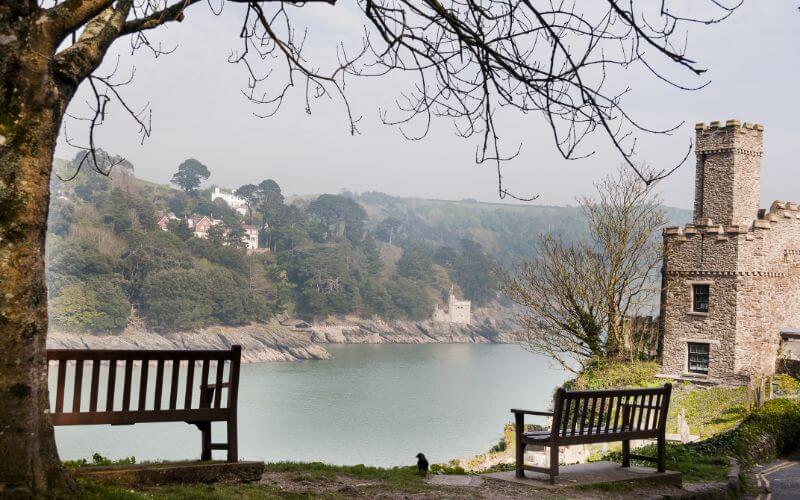 For the best shots, you’ll want to visit the places with the best views. With that in mind, we’ve put together the following guide to particularly beautiful vantage points in and around Dartmouth. It’s sure to inspire you.

Watching the sunrise at Bayard’s Cove, the picturesque quay at the entrance to Dartmouth’s harbour, is an experience you’ll never forget.

Once the coastal landscape is bathed in light, you’ll see boats bobbing on the sparkling waters and seagulls criss-crossing the sky. Admire the pastel buildings, winding streets and cobbled walkway complete with cannon before exploring the Tudor fort. Finally, treat yourself to breakfast at Bayard’s Cove Inn.

Past and present are united in this beautiful corner of the town. America’s Pilgrim Fathers moored at Bayard’s Cove almost 400 years ago, seeking help from Dartmouth’s shipwrights, and the area would still be recognisable to them today. You may recognise it from two popular BBC dramas, The Onedin Line and The Coroner.

The ‘Guardian of the Dart’, as Dartmouth Castle is affectionately known, has stood watch over the Dart Estuary for centuries. The fortress’ robust coastal defences, which include cannons capable of sinking ships, were designed to protect the townspeople and their harbour from invasion. Its neighbour is Kingswear Castle, on the opposite side of the Dart.

As a result of its historical significance, Dartmouth Castle is today looked after by English Heritage. Having defended the town and indeed the country during periods of conflict from the Middle Ages to the Second World War, the fortress now enjoys a new lease of life as a South Devon tourist attraction. Its appeal is due in no small part to its ‘stunning views of the estuary and out to sea’, as English Heritage emphasises.

Got a head for heights? Don’t miss Dartmouth Castle’s Tudor gun tower. Climb to the top of this striking, four-storey structure to reach the open roof platform. From there, you can gaze across the waters and admire Dartmouth – it’s only about a mile away.

There are many more fantastic sights to be discovered when you travel on Dartmouth Castle Ferry between the harbour and fortress. Rugged rocks, mysterious coves and ancient woodland will give your journey a magical air. Perhaps you’ll be fortunate enough to see Dartmouth’s colony of grey seals sunbathing too!

Fine Food in a Superb Setting at Bushell’s Riverside

How about combining magnificent scenery with some of Dartmouth’s best food and drink? At Bushell’s Riverside Restaurant, situated on the South Embankment, you can dine in an intimate setting while marvelling at breathtaking views of the harbour and village of Kingswear. It’s the perfect spot for a romantic meal on a summer’s evening.

Bushell’s Riverside prides itself on its hospitality and the quality of its regional, seasonal dishes (whole grilled plaice, roast topside of beef and seafood risotto, to name but a few). The menu changes daily according to what’s available locally, so you’re guaranteed a fresh, authentic taste of Dartmouth accompanied by an equally inspiring landscape.

Chef Jaime Bushell and his wife, Sarah, are celebrating five successful years as the owners of this remarkable eatery, where every table offers glorious scenery. No wonder that Bushell’s tops TripAdvisor’s list of Dartmouth restaurants with great views.

Occupying a commanding position in the hills, Britannia Royal Naval College is an amazing vantage point from which to survey Dartmouth and its harbour. This naval training academy, the only British institution of its kind, features awe-inspiring Edwardian architecture.

A more stunning setting for the education of British naval cadets, as well as their counterparts from the Commonwealth countries and elsewhere, is difficult to imagine. Dartmouth’s prestigious college offered spectators unbeatable views of HMS Queen Elizabeth, the Royal Navy’s biggest, most powerful vessel, in summer 2018. From there, Dartmouth Photos captured the aircraft carrier in all her glory sailing by the mouth of the River Dart.

If you’re on the guest list for the 2019 Port of Dartmouth Royal Regatta’s exclusive 175th anniversary event at the naval college, the Regatta 175 Celebration, you’ll be able to revel in panoramic South Devon views while enjoying cocktails, canapés and live music. ‘There really is no better view in Dartmouth,’ the regatta’s organisers assert.

Thanks to BuyAPieceOfDartmouth.uk, you can create a lasting link with one of the most stunning areas of Britain.

Rest assured that all the necessary legal fees are included in the price.