While beautiful Dartmouth attracts discerning holidaymakers all year round, there can be few more exciting times to visit this Devon harbour town than during its spectacular regatta, held annually in late August. Great Britain's coastal areas host numerous sailing-themed events, but the Port of Dartmouth Royal Regatta is undeniably one of the most prestigious. 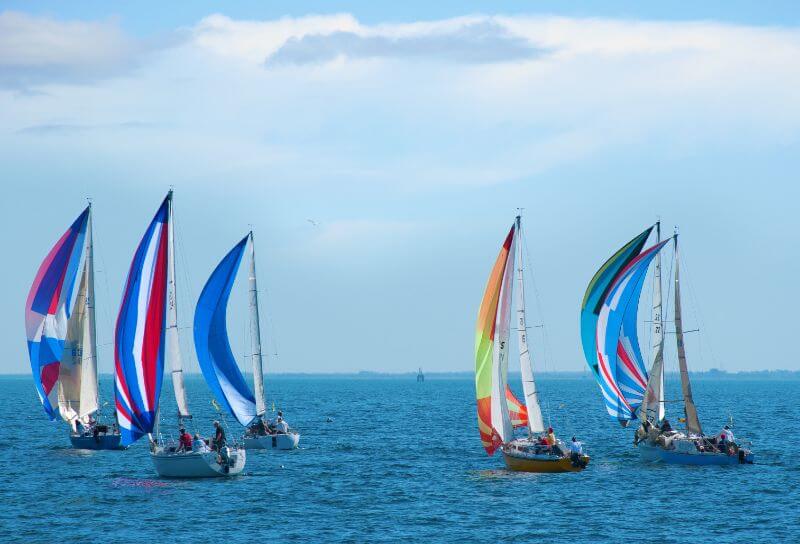 Every summer, hundreds of competitors and tens of thousands of spectators gather in Dartmouth for first-class sailing and rowing races, as well as a plethora of associated activities. With so many excellent vantage points near the harbour, Dartmouth Royal Regatta is pure theatre – a feast for the eye and thoroughly enjoyable for young and old alike.

This major Devon event 'always lives up to its reputation with superb competition and brilliant entertainment,' emphasises the Discover Dartmouth guide.

2019: A Particularly Important Year for the Regatta

The town's first regatta took place almost 200 years ago, in 1822, when yachting was fast becoming a favourite hobby among the social elite. It was a refined affair – the river-based activities were accompanied by an elegant ball and a military band played at Dartmouth Castle. After the introduction of a formal regatta committee in 1834, just a few years before Queen Victoria's long reign began, the event grew and grew.

Dartmouth Royal Regatta is set to reach a milestone this year: 2019 will mark the 175th edition of the event (regattas weren't held every year early in the event's history or during wartime). The opening ceremony is scheduled for 28 August. The regatta itself will then be held between the 29th and 31st. However, visitors can enjoy plenty of related activities from the 24th onwards – there are now so many things to see and do that they can't all take place during the traditional three-day regatta period.

Queen Victoria Made the Regatta a Royal Event

Dartmouth's key river-based event earned its royal seal of approval in August 1856, when Queen Victoria, Prince Albert and a number of their children sailed into the harbour after a daytrip to nearby Dittisham. The monarch's sketch of Dartmouth Castle from that period is held by the Royal Collection Trust. The royal couple generously donated £45 (worth approximately £2,600 today) as prize money for the regatta's rowing races.

It's often said that Queen Victoria and her companions came to Dartmouth that year because poor weather forced their flotilla to seek shelter. However, information from the Royal Collection Trust suggests that difficult sailing conditions had in fact affected a trip nine years earlier, during which Queen Victoria painted the harbour, rather than the 1856 expedition. In August 1847, the Victoria and Albert Royal Yacht was moored at Dartmouth, with those on board 'waiting for fog to clear so that they could continue their journey' to Scotland.

Dartmouth still enjoys links to the royal family: Queen Elizabeth II has a special connection with Britannia Royal Naval College, while her son, Prince Andrew, is the regatta's patron.

In addition, Dartmouth Royal Regatta highlights the town's long-standing association with the Royal Navy, which provides a guard ship to watch over the proceedings. What's more, the venue for the Regatta 175 Celebration, a sophisticated evening of cocktails, canapés and music, will be the impressive naval college's parade ground.

The Secret of the Regatta's Success: Remaining Relevant

The popularity and diversity of the Dartmouth Royal Regatta Sailing Week competitions, during which entrants vie for trophies, indicates how seriously this corner of Devon takes seamanship. But the regatta is also filled with fun, with everything from tug of war contests to open-air concerts and from crab-fishing competitions to circus skills workshops to enjoy. The event's famous firework displays are unforgettable.

Recently, Dartmouth Royal Regatta was featured on BBC Radio Devon. As the presenter, Michael Chequer, pointed out, it's the town's 'showcase event for the year'.

The future of this well-loved regatta certainly looks bright. As a previous chairman of the regatta committee, Jonathan Hawkins, pointed out in By the Dart magazine, 'It continues to be successful because although it has a long, proud tradition, it moves with the times.'

Your Chance to Become a Titled Devon Landowner

Dartmouth, home to a leading British regatta, has an incredible cultural life. At BuyAPieceOfDartmouth.uk, we make it easy for you to share in that life – even if you don't reside in the UK.

Thanks to our Dartmouth Landowner package, you can be the proud owner of a small land parcel (20 cm x 20 cm) close to the River Dart. It's a delightful way to enhance your status.

Another option is to become a land-owning Lord or Lady of Dartmouth with our Dartmouth Landowner and Seated Title package. That provides you with a small land parcel and presumed, aristocratic-style title (many options are available).