Dartmouth can trace its origins to medieval times. The local museum is the perfect place to discover the town's proud heritage and soak up the history of centuries.

You'll find the museum in the 16th century houses of the Butterwalk. These buildings are a magnificent example of Tudor architecture, with beautiful wooden fascia and fine granite pillars – a testament to Tudor building skills. 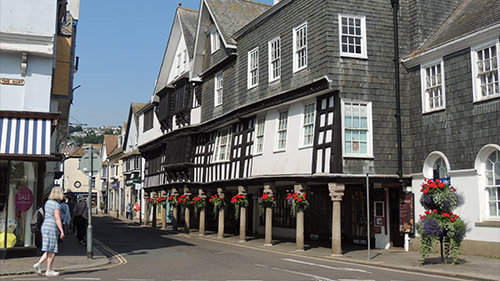 Inside, the creaking staircases, magnificent plaster ceilings and winding corridors are much the same as they were in the 1600s.

There's a great deal to see but these are the highlights…

King Charles II was a keen sailor. In 1671, he was sailing nearby when a sudden storm forced him to take shelter. Dartmouth was the nearest port and the town officials were delighted by this unforeseen visit. He was given the best room in town, and it hasn't changed much to this day. The marvellous oak panelling is just as the King saw it, and this momentous event is commemorated by the royal coat of arms above the fireplace.

The King's Room also marks the special relationship the town has with the sea. Here you'll see many maritime artefacts including numerous model ships – all beautifully crafted in exquisite detail.

Look out for the Crusader warship – a reference to the town's place as a point of embarkation for the Crusades in 1147 and 1190. You'll also see the Mayflower, vessel of the Pilgrim Fathers, which called in on the way to the New World in 1620.

The Holdsworth Room: Dartmouth at War and a Strange Tale

This room houses an extraordinary variety of artefacts, including 19th century clothing, medieval stocks and a sedan chair. There's also a dolls house representing a local manor house that burnt down following a mysterious unsolved murder in 1895.

An excellent archive of photographs commemorates Dartmouth's role in wartime. Particularly notable is local man Theodore Veale who rescued an injured officer during the Battle of the Somme in 1916, and his brave action is commemorated here.

In later years, Dartmouth played an important role in WII, when the harbour and nearby shipyard became a hive of activity with naval vessels coming in for repair. In 1944, nearly 500 vessels assembled here for the D-Day landings. Don't miss the air-raid shelter, complete with gas masks and tin hats.

Throughout the museum you're encouraged to dig deeper – rummage in drawers, examine artefacts through microscopes and ask plenty of questions.

An Aristocratic-Style Title and a Link with The Past

Dartmouth has played a vital role in major events throughout history. At BuyAPieceOfDartmouth.uk you can become a part of this noble heritage with one of our exclusive packages.

We include all legal fees and will guide you effortlessly through the process.