Dartmouth Castle: Defending the River Dart for Over 600 Years

In Dartmouth, the sense of history is almost palpable – and nowhere more so than at the town’s castle, which has stood guard over the River Dart for centuries. Few other British fortresses are as historically significant or stunningly situated as Dartmouth Castle. The Guardian of the Dart (as it’s often called) has protected the townspeople since the Middle Ages. 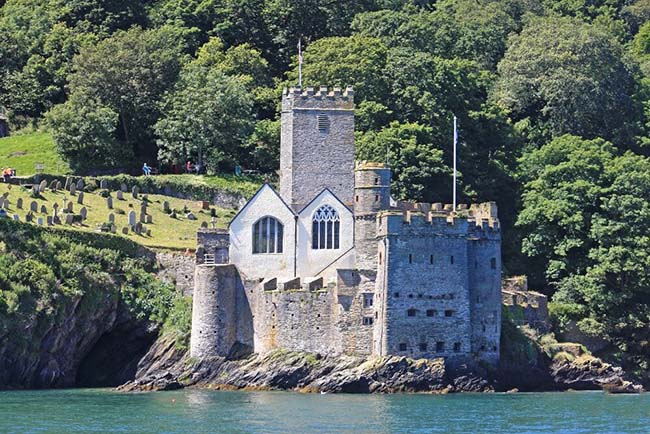 Dartmouth Castle’s defensive role is now symbolic, but between the late 14th and mid-20th centuries this military stronghold saw ‘active service’. The range of architectural styles it encompasses, from the remains of the medieval fortalice to the 1940s gun house disguised as a tower, reflects the development of weaponry and warfare over hundreds of years.

The castle is further distinguished by the presence of one of Dartmouth’s oldest places of worship, St Petrox Church, which dates back to at least 1192. The Grade I listed church represents ‘serenity and strength’ (in the parish authorities’ words). It must’ve been a welcome refuge for men defending the town in days gone by; a place where they could, even just briefly, turn their attention away from fighting and contemplate peace.

Peace was in short supply when work began on Dartmouth Castle in 1388, as England was in the midst of the Hundred Years’ War against France. Meanwhile, English privateers (sailors licensed by the government to plunder vessels from France and elsewhere) were instilling anger in many foreign powers.

As a prosperous town with an important harbour, thriving import/export trade and access to the English Channel, Dartmouth was an obvious target for invasion. It therefore required robust coastal defences – a fact that certainly didn’t escape the monarchy’s attention. A 1388 entry in the Close Rolls, the royal chancery’s administrative records, emphasises that a building suitable ‘for defence of the town and ports adjacent’ was urgently needed.

Dartmouth’s foremost privateer and mayor, John Hawley, was authorised to erect the castle’s first defensive structure. By building a high-walled fortalice, Hawley played a key role not only in protecting Dartmothians but also strengthening national security.

Eventually, Dartmouth Castle would be supported by a companion on the opposite side of the Dart, the 16th-century Kingswear Castle.

Dartmouth Castle is now an internationally important attraction visited by tens of thousands of people each year. Many approach it by boat – and receive a rather more friendly welcome than might’ve been the case in the distant past!

Our aim at BuyAPieceOfDartmouth.uk is to enable you to create a lasting link with the glorious area of Devon long watched over by Dartmouth Castle. We invite you to claim ownership of a compact land parcel (20 cm x 20 cm) close to the Dart and, if you wish, adopt a presumed, aristocratic-style title to boost your status. Imagine amazing your peers with the news that you’ve become a Lord or Lady of Dartmouth!

Become a titled landowner in prestigious Dartmouth today – it couldn’t be easier!